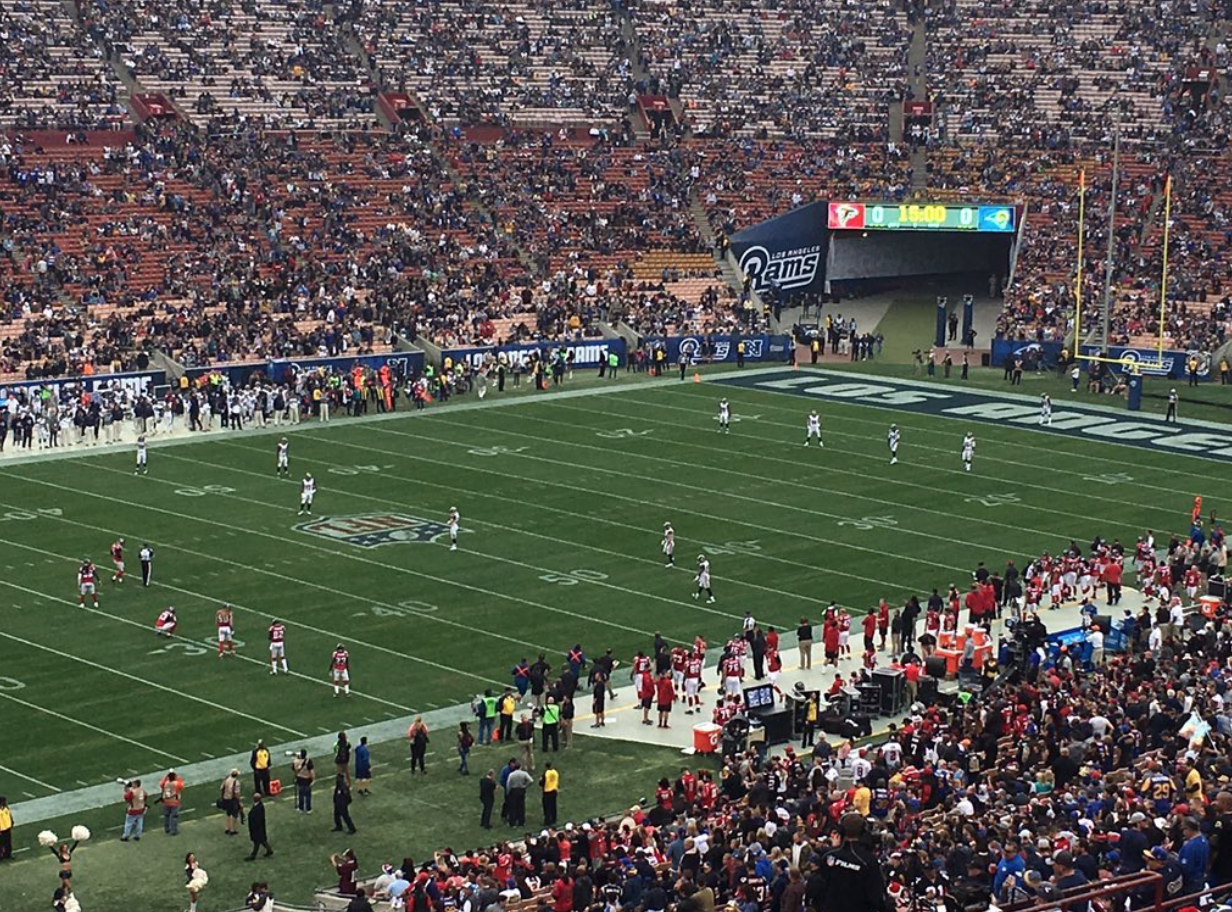 Just a few months ago, excitement filled the air in the Los Angeles Memorial Coliseum. The entry gates were packed. Chants of “Whose house? Rams’ House!” echoed through the concourse. Fans nearly filled the stadium. And this was only the second game of the preseason; a game without any real relevance, mainly played by backups. But Rams fans didn’t care. They had Rams football in Los Angeles for the first time in 36 years. I was rooting for the opposing team, my Kansas City Chiefs, and despite the preseason status of the game, I faced some aggression from a few potentially drunken Rams fans. I didn’t care. If anything, I was happy. “Good for them”, I thought. “They finally have a team to root for.”

Flash forward to mid-December. The Rams are facing off in a late season battle with the playoff-bound Atlanta Falcons. But there are some key differences from the preseason game. The excitement in the air is gone. The enthusiastic cheers are gone. The stands are sparsely filled. And this game actually counts for something. But to many Rams fans, it isn’t anything worth showing up for. Their team is 4-8, making them virtually eliminated from playoff contention. Instead of trying to prove their loyalty even during the team’s struggles, the fans didn’t show up. The home-field advantage cherished by other NFL squads was non-existent. Several playoff teams, including the Seahawks, Patriots, Falcons and Chiefs, rely on their fans to make their stadiums a loud place to play for opposing teams. This makes it harder for opposing players to communicate on offense, and it can make a significant difference in the game. But at this Rams game, the meek attendance did nothing to make the Coliseum an intimidating atmosphere for the visiting Falcons. The Rams were obliterated, 42-14.

Flash forward once more. It’s New Year’s Day in sunny San Diego. The San Diego Chargers are playing what is expected to be their last game before moving North to Los Angeles and joining the Rams to play in the Coliseum. The stadium isn’t nearly full. Half the fans that are actually in attendance, myself included, are rooting for the opposing Kansas City Chiefs. The Chargers fans in attendance look hopeless. They know that this is their last time seeing their San Diego Chargers. Many of them are taking pictures or going through rituals for one last time. The San Diego Union-Tribune published a compilation of emails addressed to Chargers owner, Dean Spanos, begging him to keep the team in San Diego. In one of the emails, Michael Meza, a die-hard Chargers fans said, “The Chargers have provided me and my family with amazing memories that will last us a lifetime. The Chargers are a huge part of this city, and if they leave, it would destroy this city.”

The Chargers will be moving to Los Angeles in search of a bigger market, a new stadium, and, most importantly, more money. For years, their fans would pack the stands to see the team play. After all, from the mid-2000s until 2013, they were one of the best teams in the NFL and consistently won their division, the AFC West. But when the team lost a few key players and needed to rebuild, the fans stopped showing up. The seats were often empty or filled by visiting fans of opposing teams (like me). When ballot measures were proposed to provide city funding to replace the Chargers’ outdated home, Qualcomm Stadium, with a new, world-class facility, San Diego residents voted strongly against them. The Chargers’ fanbase was terminally fair-weathered, and it cost them their football team.

Now many Rams fans — including several Milken students — are treading the same line that Chargers fans had been for the past few years. The Rams had a very disappointing first year in Los Angeles, and it’s tempting for Rams fans to stop paying attention and supporting their team until they improve significantly. As a football fan, I understand it. The Chiefs have been awful for most of my life. But I (and the majority of the Chiefs fanbase) never allowed myself to lose loyalty, and now my patience has paid off: the Chiefs hosted a Divisional Round game for the first time since 2003. Meanwhile, Chargers fans in San Diego abandoned their team when they failed, and now they are losing the franchise altogether.

I am not attempting to suggest that the Rams and Chargers are going anywhere. Rams owner Stan Kroenke is building a brand new, $2.6 billion stadium, and has already invested so much in the move to Los Angeles that it would make no sense to move the Rams away anytime soon. The same goes for Chargers owner, Dean Spanos, who agreed to a lease deal with the Rams to play at their new stadium once it is built. But if fans don’t give Kroenke and Spanos reason to believe that they can make above the league average in profits, the owners will be less inclined to spend the maximum amount allowed by the NFL to build a strong roster. Many of the NFL’s best teams, such as the Chiefs,  Raiders and Seahawks, have had awful stretches in the recent past, but have had fanbases that were loyal and gave the owners reason to make the maximum investment in the success of the teams. With the Rams and Chargers, fans will have to be patient and allow the teams a few years to grow and improve. If fans keep supporting the teams by buying tickets and merchandise like they did amidst the early-season hype, the owners will take notice and invest in the quality of the team. If not, they may always be disappointed with the product on the field.