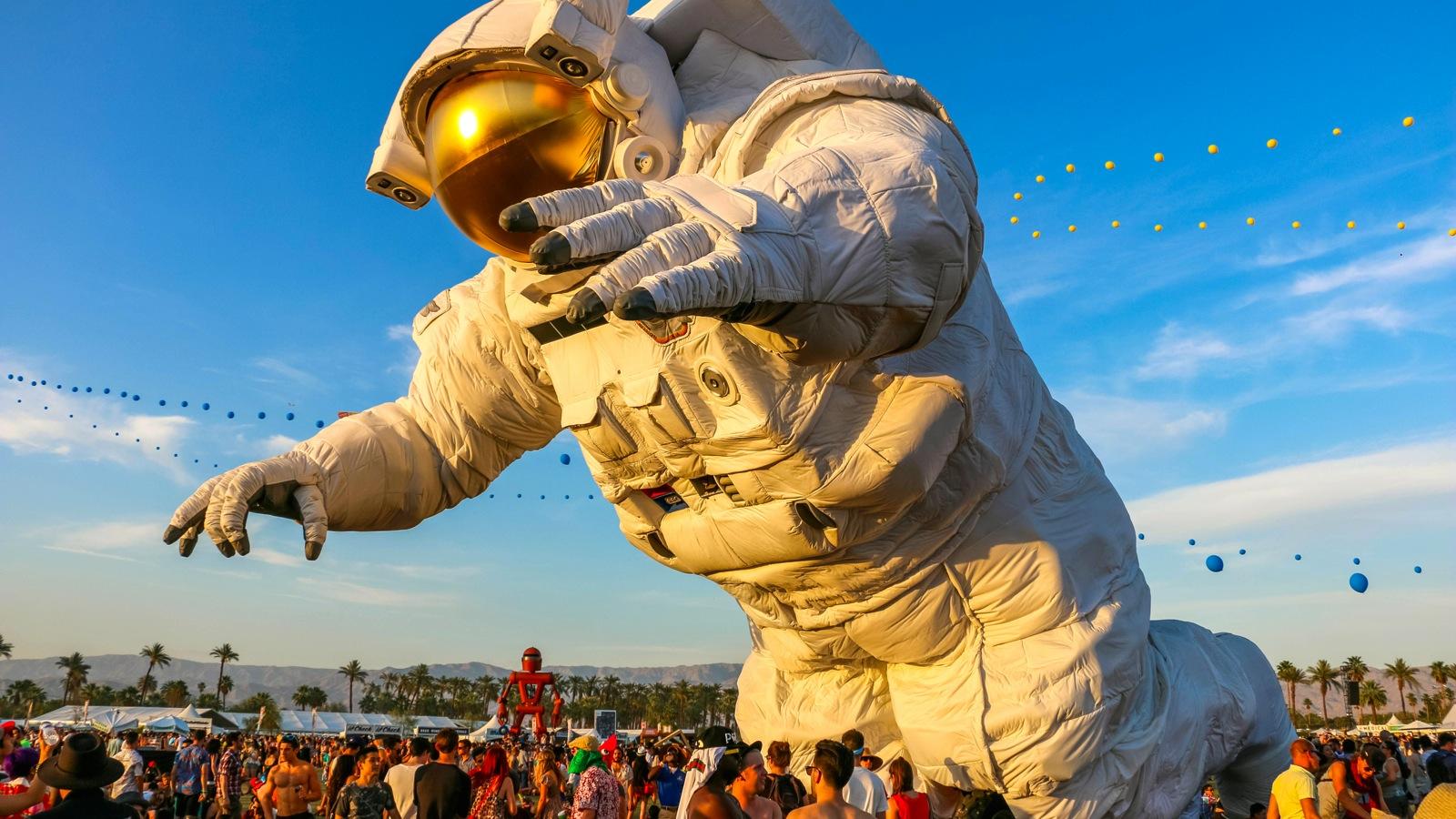 *I would like to thank Britt Jacobson ’17, Lauren Cohen ’17 and Rachel Sarrafzadeh ’17 for their thoughts and constructive insights. This article wouldn’t have been possible without them. I’m lucky to be  part of such a supportive and open community of thinkers and writers.*

We, Jews, left the sands of the Sinai for the selfie sticks of the Coachella Valley. We left one desert in a pursuit for freedom– and each spring, we return to a different desert and commit ourselves to a new slavery. This new slavery is self-imposed and falls under the jurisdiction of social and commercial distortion, our new pharaoh.

Am I being cynical? Overly-general? Misguided? Sure. I may well be flat out wrong. I’ve never been to Coachella to experience its teenage bohemia. You may already feel offended– or downright uninterested– in reading the rest of this piece, which I can understand. I acknowledge that a lot of people go to Coachella to hear its music and see its art and use their posting to document and share (rather than distort) their experiences. And I admit that I spent a good chunk of Coachella Weekend 1 loathing….and loathing….and loathing because I felt like I was missing out. There is a legitimate excitement– almost ecstasy– that I recognize and hope readers understand that I recognize. (Don’t think I don’t see you smirking.)

A mind-blowing experience and a blown-up newsfeed are not what I take issue with. Instead of having our minds blown and only then blowing up our newsfeeds, we’ve adopted the reverse: we blow up our newsfeeds to then blow our minds. With every pose and edit via social media, we’ve become accustomed to molding our experiences and “advertising” ourselves. We entertain a certain romanticism and believe in certain expectations. We hold our convictions so strongly that we forget imperfections. We get swayed too easily by escapism. And our distorted perceptions become reality. Our jetting off to the desert to escape the fullness and complexities and imperfections of our lives is no exception.

So here is my message to the Snapchat ravers and bedazzled flower children of the Indio Valley:

There are many things I don’t understand.

I don’t understand the anticipation for dehydration, three hours of sleep, bruised knees, exceptionally sore throats (soon-to-be-colds) and smoke-filled spaces– all for a crammed camera roll and “likes.” I don’t understand why we remember the loosening buzz of a beer– but not the artist on stage.

I don’t understand the point of a “Coachella diet” and our generation’s die-hard dedication to making sure we look good half-naked. What does not eating pasta have to do with seeing James Blake? And why should– or would– James Blake (or anyone else for that matter) be body-inspecting at a music festival? Since when does enjoying music equate to celery and ONLY celery?

And in line with maintaining a certain image, I don’t understand “Coachella outfits.” It’s not the planning– or the clothes themselves– that I take issue with. Rather, it’s the intention behind them; just like social media, they represent the desire to “edit” and “create” ingenuine forms of ourselves and worst of all, conform. If you didn’t like it before, why now follow the “hippie” mold of ripped denim shorts and lace crop tops?

Before entering into the mainstream spotlight, Coachella held mystery and represented the nonconformity of bohemia. Simply put, Coachella used to be “indie.” The eccentricity and free spiritedness that it once attracted have disintegrated away as the festival has grown and become much more commercial, as attitudes towards what’s “unique” or “cool” have become less distinguished. The experience, in some ways, seems to be diluted down to a checklist: lace bra? Check. Watermelon? Check. Instagram of you fake-laughing on grass? Check.

The romantic idea of running through the desert in fringe and the freedom we’ve associated with Coachella are nothing more than ghost ideas. The Coachella of six years ago cannot be recreated today even with one thousand sheer kimonos and flower crowns. And trying to only propels the conformist-bohemian paradox: we try to look special to feel special but doing so only leaves us less distinguished and looking like everyone else.

The vapidity of paradoxical bohemian conformity is not what Coachella and its artists stand for. We’ve mistaken our freedom for not just conformity, but dependence on what we’ve been told to believe and feel.

Tell me, how much of Coachella euphoria is real and how much is distorted?

I went around campus asking students this question. Contrary to the overwhelming sharing of positive posts and sentiments that we’re all familiar with, dissension over the quality of the Coachella experience does exist.

Aaron Feldman ‘18, who has no interest in attending the festival, described Coachella as a “psychedelic experience” and did not deny its authenticity: “[the] way people talk about it makes it seem like [they are having] fun.” Other underclassmen, like Michael Amin ‘19 and Eden Zoghi ‘19, also recognized and believed in the spirit of the festival. Amin shared that like other teenagers, he’s drawn to the festival because it gives people time to “be with [their] friends,” creates spaces for “more freedom” and gives students chained to the stresses of high school a taste of “life after school” (all of which upperclassmen, like Autria Mashian ‘17 and Lauren Mokhtarzadeh ‘17 do attest to having experienced). But when listening to underclassmen, I recognized that their opinions were not necessarily influenced by the quality of the music or the festival itself– but by their own reactions to what’s been already established as a fun and freeing social outlet for escapism.

Kobi Hekmat ‘17 and Dylan Damavandi ‘17, who attended Coachella this year, shared a different reason for going; rather than being motivated by the social scene or independence, Hekmat claimed that his “primary reason for going was for the music.” He noted that if he didn’t like the music, but his friends were still going (an issue becoming ever more common), he wouldn’t have been as interested in attending the festival.

I’ve concluded that the driving force attracting flocks of thousands of teenagers and young adults to the Indio Valley is not the music or social scene or freedom, but something encompassing them: distortion through advertisement and commercialization. When asked about Coachella, Noor Kohanim’s ‘17 eyes sparkled for a quick moment, recounting her memories, and then answered candidly: “Past videos and pictures made me feel like it was a fantasy, but when I got there… I [had been] to FYF, and it was similar to that. I don’t know why Coachella [was made out] so different…Everyone dresses the same..everything [is set] up [the same]..It’s fun, an experience, but it is overrated.”

In some ways, formal media coverage and paid promotions are of only secondary importance. Word of mouth and our own Instagram or Facebook feeds and Snapchat accounts are what implant our expectations and feed our excitement; they not only “advertise” the lives that we want to project, but simultaneously advertise the festival by magnifying its desirability and a pressure for other people to go. It’s become clear to me now that distorting our own posts is not a conscious decision– but a reflection of what we’re surrounded by.

What I and many others, like Noor, recognize as distortion, English Department Chair, Thomas Moran, sees as a kind of “social” urban gentrification. Just as “low cost housing areas are consistently infiltrated….and corporations move in…[and an] entire artistic neighborhood is forced to relocate and start again,” Moran explained that the same concept can be applied to music festivals. A festival, like Coachella, will originally be “underground…with true fans… [and will catch] on.. [and will be] infiltrated by paparazzi, [with] less authentic fan bases…[making Coachella] nothing more than a commercial hyperbole of original intent.”

My issue with the pretenses of Coachella, more than anything, speak to the vapidity and pretenses of our lives. It’s not just escapism that is the issue, but who (advertisers and social media users) and what (popular pressures and expectations) are telling us what to run away from and find refuge in. Only until we define what it is that we’re escaping from will we be able to feel and live and enjoy more authentically. Our first step in getting us to where we want to be demands us all to reassess our self-image and our motives. And only until I get myself to that level of being present and true to myself will I reconsider joining the rest of the Milken music festival bandwagon.