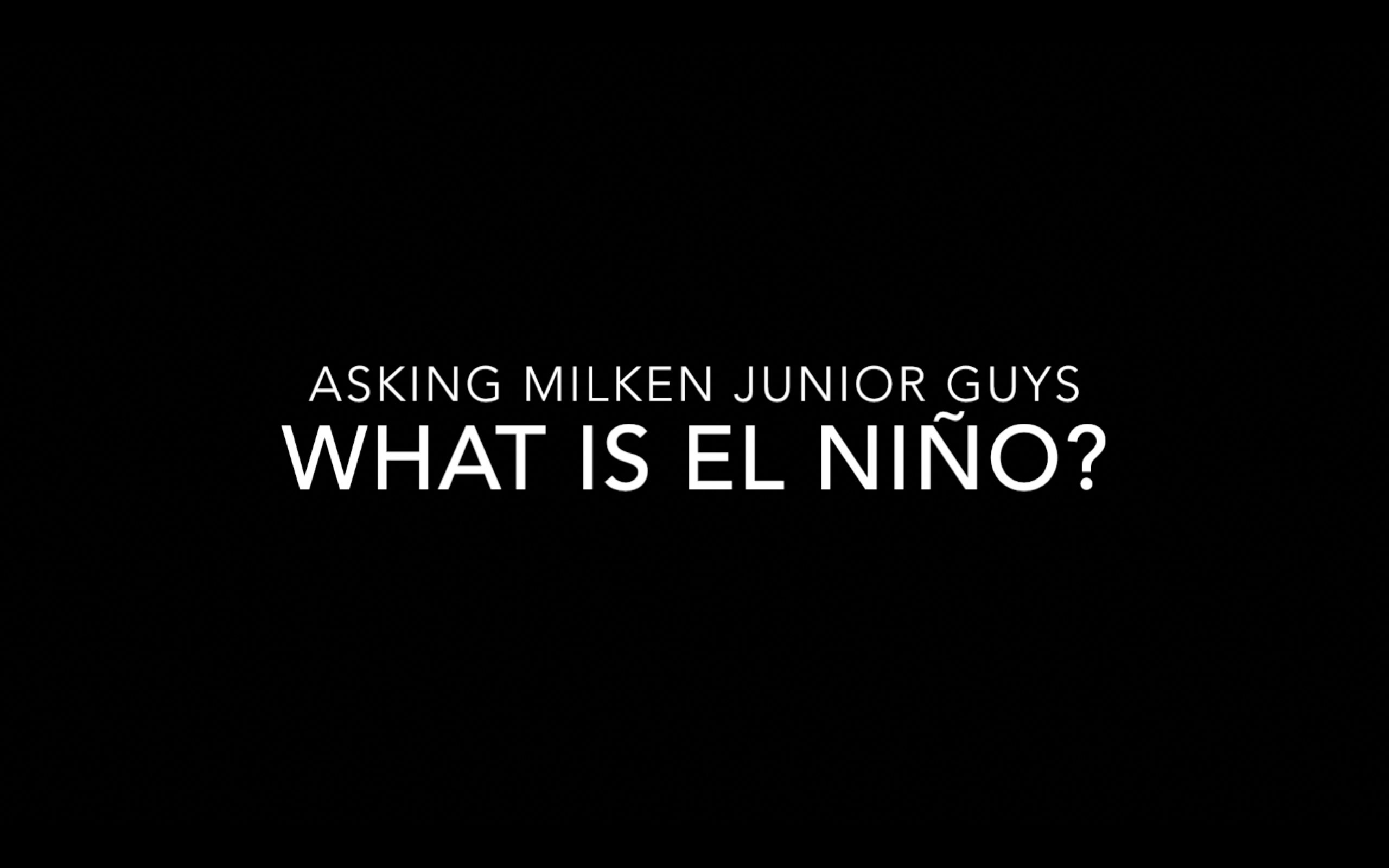 As you can see from the video above, Milken needs a little clarification as to what El Niño exactly is. In short, El Niño is a naturally occurring climate cycle in the Pacific Ocean near the equator. The west coast will be receiving many thunderstorms and rain this winter due to the abnormal wind currents.

Normally, during winter months in the Pacific Ocean, winds push all the warm water from the west coast, towards east Asia. However, this year, that is not the case. The wind currents are not as strong during an El Niño, and all the warm winds stay on our coast. The warm seawater creates lots of moisture in the air above. Thus, during El Niño, these persistent thunderstorms will shift from the middle of the Pacific Ocean towards the west coast.

Along with this warm water comes warmer winds. So, be prepared for warmer temperatures during the thunderstorms.

El Niño is not only affecting the pacific ocean. It can actually have an effect on other atmospheric changes as well. El Niño causes wetter climates in the southern United States, and creates drier climates in the Ohio Valley, as well as Great Lakes and Northern Rockies.

An El Niño system occurs approximately every 2 to 7 years. Scientists can try to measure water temperature in the Pacific Ocean, but an El Niño system is still very unpredictable. In fact, not all El Niño climate cycles are the same. Each one is very different, but according to Mike Halpert, Deputy Director of the Climate Prediction Center, “El Niño is already strong and mature, and is forecasted to continue gaining strength. It is expected to be among the three strongest on record since 1950.”

All of the discussion about El Niño raises the question: how bad will it get in Los Angeles? Bill Patzert, a climatologist for NASA’s Jet Propulsion Laboratory in La Canada Flintridge, said, “Los Angelenos need to prepare for mudslides, heavy rainfall, one storm after another like a conveyor belt.”

Milken students, and many others, seem to be troubled as to why the system is called El Niño, because in English the phrase means “little child.” This seems very random and irrelevant due to what El Niño actually is, but there is a hidden meaning behind it. The term “little child” relates because fisherman off the coast of South America noted this change in warmer water temperature around the end of the year.

El Niño has already started in Los Angeles, and experts have reason to believe that it may go into April and May. Everybody be sure to stock up on rain gear. Milken students are certainly in for a long El Niño.