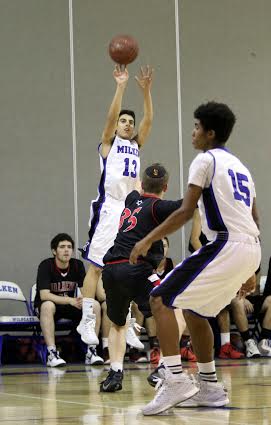 After a disappointing season last year, the boys varsity basketball team is off to a better start this season. The Wildcats currently have a 9-7 record, with a 2nd place finish in the Fairmont Prep Tournament being a highlight. The team not only has talent, but also younger players with potential. One of their new star players is Tamir Saban ‘18. This is his first year at Milken, after moving from Israel.

Their highlight game was on December 2nd vs Valley Torah High School. It was an important  game for both Jewish schools. In a tension filled fourth quarter, the Wildcats prevailed thanks to a late three pointer from Saban. Following the victory the team moved up on the Jewish Hoops America National rankings by 11 spots.

The Wildcats also have lost on a crucial three pointer earlier this season. In their opening game against Oakwood, the Gorilla’s point guard scored a running three pointer at the buzzer to win the game.

The varsity team recently finished the San Fernando Valley Tournament. The tournament was filled with elite competition and while results were not great it gave the team a warm up for league play.Hopeful for a better finish in the Liberty League, Brian Pearlman ‘17 said, “We didn’t win a single game during league last year. This year we are a better and closer team which gives us an advantage towards winning the league. The varsity basketball team has lots of talent and passion. We are determined to have an amazing season. Overall, this could be a great season for the Milken boys varsity basketball team.”