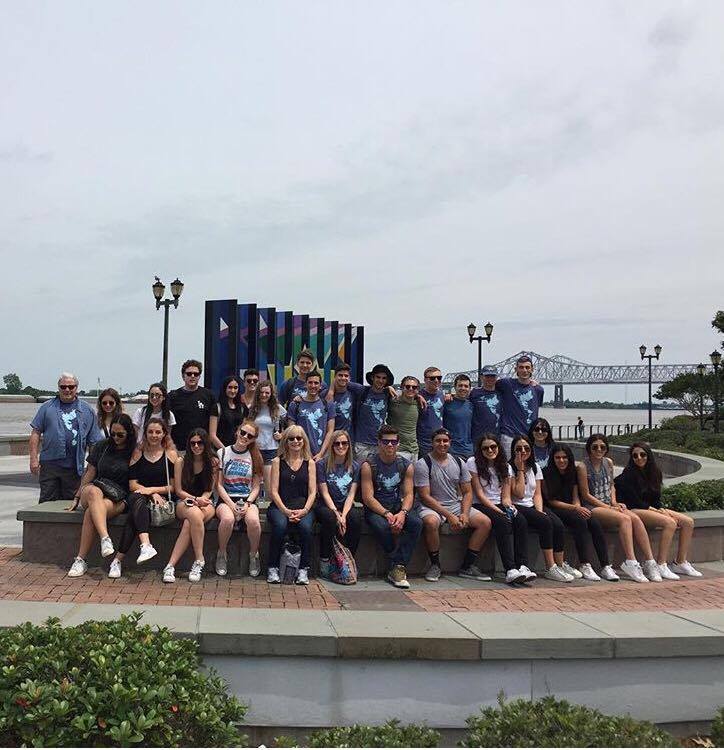 Over Tiyul week, a group of Milken students journeyed into the vibrant, eccentric city of New Orleans to continue rebuilding the city that was ravaged by Hurricane Katrina eleven years ago. In addition to rebuilding, students had a chance to experience the distinct culture found in New Orleans by way of music, tours and food. The students saw the damage done by the hurricane, and the dire need to finish the rebuilding project.

The service aspect of the New Orleans Tiyul was done with the Saint Bernard Project, a local organization that was started by New Orleanians in response to Katrina. Students on the tiyul worked on houses that were rebuilt, and in the final stages before a displaced family could return to the New Orleans community.

The sense of community in New Orleans is strong, and the tiyul group saw a community event firsthand when Mr. Lee, a 94 year old World War 2 Veteran and grandson of a slave, returned to his rebuilt home, courtesy of the St. Bernard Project. The “Welcome Home” party took place right on Mr. Lee’s new front lawn. Neighbors, friends, family and spectators, about 200 people in all, gathered for a ceremony in honor of Mr. Lee’s return. Abby Zuckerman ‘17 was very moved by the ceremony and thought “it was touching to physically see someone’s life change. Mr. Lee has such great character, and it was wonderful to see that the work of the St. Bernard Project payed off.”

Vibrant culture was also present for the students in New Orleans. Students had ample opportunity to eat beignets from the famous cafes, such as Cafe du Monde and bakeries in the French Quarter. Additionally, students were treated to a concert in the famed Preservation Hall. After waiting in line for two hours, the group sat on the floor and heard five songs from the Preservation Hall Jazz Band. “I’m not a fan of jazz,” said Lila Hanish ‘17. “But I really enjoyed listening to some of the best performers there are.”

The airboat tour across the swamps of Louisiana was a thrill-seeking adventure that students will never forget. Wildlife experts, Arthur Matherne and his sons, took the group on an exciting ride through the marshes, and encountered plenty of alligators- big and small. Students were introduced to a 13 foot, 1,000 pound alligator named “Big Al.” Big Al and his friends were not afraid of their guests, some even had the chance to climb aboard the boat. Some significantly smaller alligators were let on the boat, so students could hold these beautiful creatures. Aaron Harouni ‘18 said, “It was a scary and nerve-racking experience, but it was really cool to hold the baby alligator.” While these reptiles may seem viscous, the group learned that these baby alligators have only a five percent chance at survival. Students left the swamp with a newfound appreciation for the wildlife and unique ecosystem of New Orleans

Even after eleven years, the people of New Orleans still need help. Aaron Lawrence ‘17 was deeply affected by the Tiyul, explaining “I now understand how much damage can be done by natural disasters, but as large as the damage is, I now know that I can make a difference.” While the group’s efforts did not rebuild the entire city, their hard work and dedication to service made a difference in the lives of people affected by the hurricane. They now have a hand invested in the rebuilding effort.