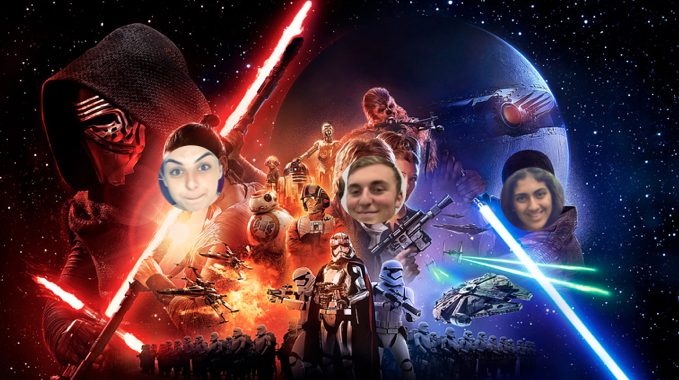 Hello young Padwan. Perhaps you are a fellow fanboy like us. Perhaps new to the force you are. Regardless, welcome to the epic world of Star Wars.

Star Wars: The Force Awakens was the first Star Wars movie to be released in over a decade, making it the seventh movie in the franchise. After Disney acquired Lucasfilm in 2012, it announced that it would be releasing a new trilogy of movies, and The Force Awakens is only the beginning. In addition to upcoming Episodes VIII and VIIII, there will be a movie focusing on Han Solo and possibly another exploring Boba Fett’s character. Star Wars Land is set to open in both Disneyland and Disney World by 2020. The Force Awakens has already broken records in total earnings, becoming the first movie to pass the $800 million mark. It also took third place for the #3 highest-grossing movie domestically. Read more about this by clicking here.

The movie is set 30 years after the glorious destruction of the Empire, when a new evil has surfaced called the First Order. Their goal is to destroy the rebel alliance, and more importantly, kill Luke Skywalker. DUN DUN DUN. No one knows where Luke is, but Resistance’s best pilot, Poe Dameron, searches for the missing map that will hopefully lead to Luke. 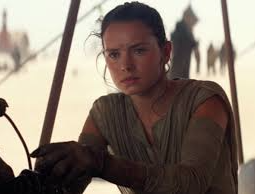 Rey is a scavenger on the desolate desert planet Jakku. She has no family and spends her days collecting spare ship parts in return for food. Although in an unfortunate circumstance, her unconditional hope for a brighter future is very relatable. Her life changes forever when she meets a lovable orange droid known as BB-8.

Who is Kylo Ren? 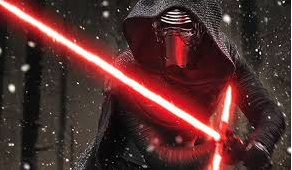 Kylo Ren is the new villain, working with the First Order. *SPOILER ALERT* Kylo Ren is the son of Han Solo and Princess Leia Organa, and has the powers of the force like his grandfather (Darth Vader) and uncle (Luke Skywalker), but turned to the dark side, not unlike the former. 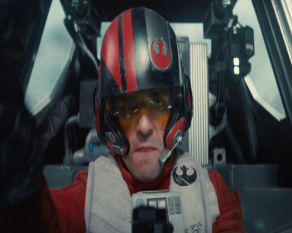 Poe Dameron is the resistance’s best fighter pilot. You could even say he is Princess Leia’s “only hope” to finding Luke. 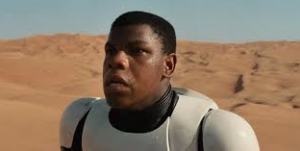 Finn is a stormtrooper who leaves his life with the First Order and decides to free Poe from their clutches.

Did you notice any similarities between the First Order and the Nazis? 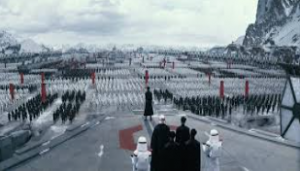 Michael: Well, there has always been a Nazi influence, even in the galaxy far far away. Let’s start with the clothing. The imperial officers of the First Order have strikingly similar uniforms to Hitler’s commanders. The army of evil soldiers has always been called Stormtroopers. This is a huge nod to the Nazi regime because Hitler’s top soldiers were called the Stormtroopers. They were highly trained, brutal, and very dangerous.

In The Force Awakens specifically, there is scene in which Domhnall Gleeson’s character, General Hux, gives a speech to the First Order. This was very reminiscent of a speech that Hitler would make to troops, with the large formations of stormtroopers and the giant banners with the emblem of the First Order. General Hux violently yells at his soldiers to destroy the rebels. They even have a salute like the Nazi’s, except theirs is a closed fist. In short, I was shaking through that whole scene, and the Nazi influence gave the First Order an authentic horror.

Britt: Nazi influence was really prevalent in this movie. While there are obvious WWII influences in the Empire’s uniforms in earlier movies, certain scenes, like the speech that Michael mentioned, really struck me. I was able to empathize with the characters being oppressed in this movie much more effectively than before.

Lauren: I definitely felt that there was a Nazi influence on the First Order in the most recent movie. All the First Order officers wore uniforms and black shiny boots like the Nazis did. The officers also blatantly listened to General Hux’s orders, even if it they were immoral. In the first scene of The Force Awakens, stormtroopers, who are under the First Order’s control, are commanded to kill innocent people. Inevitably, this reminded me of the experience that people had during World War II.

What did you think of Kylo Ren and how does he compare to Darth Vader? 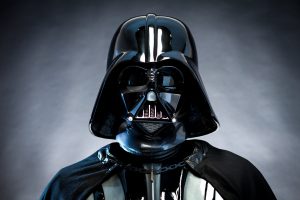 Britt: I thought Kylo Ren’s character was weak compared to Darth Vader. We see the metamorphosis from Anakin Skywalker to Darth Vader in the prequels, and have an appreciation for the enormous suffering this character endured before transforming into one of the most recognizable villains in cinematic history. Kylo Ren will never reach the levels of infamy that Vader has, since he appears as an angsty rebellious teenager. That perception of Kylo Ren is best exemplified by the twitter account, “Emo Kylo-Ren”.

Lauren: As Britt stated, I think that Kylo Ren is also weak when compared to Darth Vader, and that Adam Driver is gorgeous. Yes, he has a red lightsaber and wears an all black outfit, but can Kylo Ren ever be as notorious as Darth Vader? Who can compare to Darth Vader, what with his weird breathing sounds and his great fathering skills? Throughout the movie, we see Kylo Ren struggling with the strength of his power. I think that he has some light left in him, showing that he is a human with a heart, unlike Darth Vader. I hope that in the upcoming movies, we get to see what happened to Kylo Ren that made him turn to the dark side.

Michael: I agree yet again with my comrades: Kylo Ren will never compare to Darth Vader. Darth Vader is possibly one of the greatest villains in cinematic history. Adam Driver did a fantastic job as the baddy, but no one compares to Lord Vader. Kylo clearly has some anger issues and I loved his temper tantrums.

What is your opinion about the increase in female roles?

Michael: I love Rey, and her process of discovering the force was told beautifully. It is also important to note that I have confessed my love for Daisy Ridley, and although some tell me she is in a relationship, I still believe we can be a Jedi power couple. I must say Captain Phasma was a great character, but very underused. However, I think some major squabing is going to go down between her and Finn in the next movie.

Britt: YES WOMEN! Not only was there an increase in female roles, but of course it’s worth mentioning that there were far more minorities represented in the film. I think it truly speaks volumes about some shifts in Hollywood, which  has previously been dominated by white males.

Lauren: WOO HOO! It’s about time. When Rey is allured towards the force and uses Luke’s lightsaber, I was beyond delighted. It’s about time that girls get to fight the bad guy and be tough.

Episode 6 (Slave Princess Leia murdering Jabba the Hutt and Ewoks)
Episode 4
Episode 5
Episodes 1, 2, 3 I don’t really care about, but I will give them all major creds costume-wise for Queen Amidala. Slay.

Episode 3 (the epic battle between Obi-Wan Kenobi and Anakin)
Episode 5 (“I am your father.” DUH DUH DUH)
Episode 6
Episode 4
Episode 1 (young Anakin was such a cutie)
Episode 2

If you could be any of the new characters who would you be?

Britt: I would undoubtedly be Rey. I think Rey’s character has the potential to really influence younger girls watching these new movies, not unlike Princess Leia, just being such an independent and determined figure. She knows what she wants and has no problem standing up for herself. Also, she might be the first female Jedi, so HECK YEAH I WANT TO BE HER.

Lauren: Not with one ounce of hesitation- Rey. She is so hard-core, confident, and independent. She knows what she wants and gets it, letting nothing get in her way. I also just want to hold a lightsaber…don’t judge me. I wouldn’t mind being Chewbacca either because me and Hans Solo would be the ultimate squad.

What is your favorite fan-theory? Do you have any of your own to add?

Michael: I have a theory that Mace Windu (Samuel L. Jackson) is still alive. This is not a legitimate theory because Mace was chopped in half and pushed out a window. I just really like Samuel L Jackson.

Britt: I love this connection between Judaism and Star Wars- it might not be intentional but it’s amazing that someone found all of these little clues!

Britt: Three of my loves: The Cantina Songs, Mac Demarco and Jar Jar Binks. JK, two of my loves. No one loves Jar Jar.

What did you think of the overall movie?

Michael: JJ reinvigorated this franchise and brought us to back to the galaxy that we love. Although it parallelled Episode 4, it was a fun movie that had intense action, great characters, and a lot of heart.

Britt: Overall I was pretty impressed. I liked the story line. It made me laugh, it made me cry. I understand where my friends are coming from when they say that it’s overhyped. I might even need a mini break from all of the marketing for this movie…. but a short one.

Lauren: I enjoyed the movie, and think that Lucasfilms did a great job. The first Star Wars movie from 1977 had great features and graphics of the future, so I knew that the 2015 version was going to be even better. I loved that most of the original characters were featured in the movie- it made it feel old and new at the same time. After seeing the movie, I was a tangled ball of emotions. I left that movie theater having laughed, feeling sad, happy, and wanting more.

May the force be with you.

If you liked Star Wars, we would also recommend watching Fanboys.