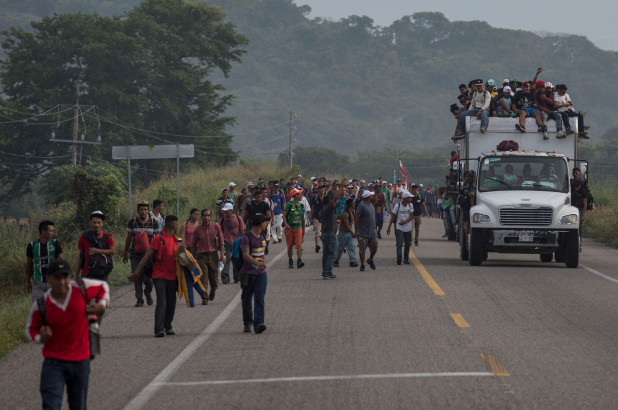 During the Holocaust, the MS St. Louis, a boat full of Jewish migrants attempting to escape the horrors of Nazi Germany by rebuilding their wrecked lives in the Land of the Free, was turned away at the US border and sent back to the country they had risked their lives to flee. After the war, the United Nations established the UN Refugee Agency, or the UNHCR, that spelled out specific rights and protections that should be granted to asylum seekers. Although these policies have been abused politically, they continue to bring opportunity to those who are being discriminated against in their own homes. The preservation of these laws has shakily held together the first and third worlds in an otherwise polarized climate.

From a domestic political dispute in Honduras grew an American socio-political phenomenon in the form of a caravan of thousands of migrants hoping to escape the horrors of their homelands and begin a new life in the land of opportunity. Although this is not the first time a caravan has made its way to the border, the longing migrants were soon transformed into a political weapon wielded by President Trump in the face of a questionable midterm election. In rallies and tweets, he associated the caravan with the Democrats, labelling it a dangerous threat to the safety of American-born citizens.

Within a month of the midterm election, over 5,000 US troops were sent to the border. It is extremely unusual for active duty troops to be deployed inside of the US, and even more rare is the use of American soldiers as a political tool. Trump called this mission Operation Faithful Patriot. On the day after the election, however, the name was changed to Operation Border Support by Secretary of Defense James Mattis as a consequence of being too political.

President Trump and his team are clearly attempting to balance the clear political motive behind the militarization of a practice that has been prominent in and even representative of America since its foundation, turning the caravan into a foreign weapon that poses a serious threat to the safety and integrity of the United States. In this effort, Trump has made claims that there are Middle Easterners aboard the caravan, with absolutely no basis in fact. These desperate attempts at villainizing a group that is fleeing the place they have grown up and travelling through countries — some on foot — have fallen short even with the soldiers deployed to the southern border. Although, on record, most will refrain from criticizing their Commander in Chief. Reporters who have gone to the border have said that tensions are high, and the men and women stationed there are beginning to question the motives for being there. They are convinced that the threat they are supposedly defending the US from does not actually exist. This opposition extends to the Pentagon, where reports suggest that many are enraged at this political use of the armed forces.

After the end of the midterms, the troops waiting for the caravan continued their station at the southern border. They have missed Thanksgiving, and with the beginning of winter approaching it seems almost ridiculous that our National Defense has been waiting around for months for a group of immigrants. Besides the waste of soldiers’ time, effort, and faith in the integrity of our military, this deployment also will cost the United States large sums of money — estimates go up to 200 million dollars.

Our federal budget, our armed forces, and a massive amount of division and hostility are currently directed towards a practice that has defined the United States continually since its conception. The vow we made as a country to help those being persecuted in their own nations is being blatantly ignored and left in the dust, replaced by an unconditional fear for all those who are in any way different from us. A human rights issue that has laced its way into the heart of our nation has become a controversial political topic.

President Trump did not respond to The Roar’s request for comment.