Every time I go to a store, there is always a separate section for boys and girls. For the boys, there are always trucks, legos, and superheroes; and for girls there are barbies and princesses. But due to customer complaints that there was no reason for there to be such an obvious distinction between gender items, Target has now announced that they are working to remove gender labels from toys. With gender discrimination, target revealed their plan to remove signs that say “boys or girls toys.” Instead, these labels will start to say “kids toys”. Previously, there were pink and yellow backgrounds for girls, and blue and green backgrounds for boys sections. They will now be replaced with a wooden grain tone paper. With the labels being removed, customers now have more control and can decide what is the ideal toy for the boy or girl, rather than being told what category your child fits into.

Children are constantly being told what’s appropriate for their gender. It can be hard for a child of the opposite gender to show interest in a toy that says “only for girls” or “only for boys.” And if a child of the opposite gender does choose to play with toys that aren’t recommended for their gender, they are an easy target for teasing. Manufacturers need to get rid of all labels, and kids should not feel pressured to only play with toys specifically intended for their gender. Kaitlin Banafsheha ’17 is relieved that large companies like Target are taking steps to be more accepting of all customer choices. She said, “Now that I’m able to shop in a coed section, all preconceived thoughts and ideas about how I can do things as a girl have been thrown away. As a small child I would want to go and buy basketball cards, but I would feel awkward going into the boys section. Now that Target is doing this, I wish that I was a little girl again, so I can walk down the aisle with no shame.”

Kids shopping at Target won’t have to feel like they are forced to only shop in their gender area. Hopefully, Target’s new initiative will move our culture and country in a more accepting direction. And with this improvement, customers won’t need to feel limited in the way they want to express themselves. 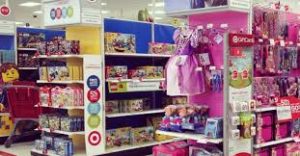