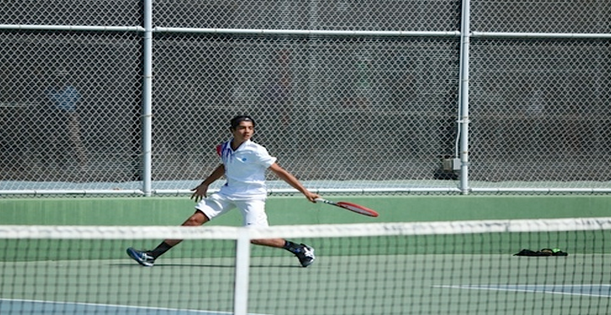 This season, Milken’s varsity tennis team experienced more success than in any of the previous three years. And with their season and playoff run coming to a close, it is important to note that much of Milken’s success this year can be attributed to the talent and leadership of Samuel Feit ‘16. While being unanimously considered the most talented player on the team, Feit didn’t lose a set all year. Sam not only helped the team finish second in league and make the CIF playoffs for the first time in three years, but he also won the league’s individual tournament for singles and received the title of League MVP.

When asked about the accomplishments of the tennis team this season Sam noted that “[He] definitely saw progress from the team as a whole throughout the season. Everyone got better and wanted to win.”

Sam was also a huge help during practice. His presence alone pushed the team to play better. As Josh Berenbaum ’17 put it, “when Sam was at practice he really pushed us and made us better. We all knew that when we were playing with Sam we had to step up our game.”

And Sam was a huge asset during the actual matches. First of all, he was reliable for three wins per match. This meant that in every single match, Sam was single handedly responsible for a third of the wins needed to at least force a tie. But Sam was also crucial when it came to coaching his teammates. He, along with Head Coach Omar Morgades, helped other players with game planning and strategy before and even during the matches. When asked about his advice during matches Sam said that, “since [he has] played so many matches throughout my career, [his] tennis IQ is higher than most on the team. This allows [him] to advise [his] teammates and help them see things that they might not have seen by themselves.” Co-Captain Justin Leff added that “Sam is a lot like a second coach. He is incredibly talented and always has words of encouragement.”

When asked about this year’s success Sam commented that “this year was great. Everyone worked really hard to make the playoffs and with most of the team returning next season, [he doesn’t] see why we can’t have even more success next year.”

While Sam was only a cog in the machine of this year’s varsity tennis team, it is important to note his grand contributions. With his leadership and talent Sam was able to have an effect on every player. Even though he only has one more year of eligibility, expectations are high as the tennis team and Sam look to improve on the success they achieved this spring.