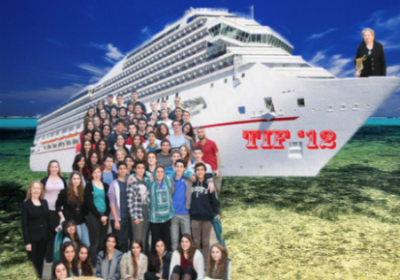 In a shocking turn of events, The Roar’s Nofim Education Team has found that Milken’s flagship Tiferet Israel Fellowship program, often referred to as the crown jewel of the Milken experience, does not actually send students to Israel.

Instead, students embark on a four-month luxury cruise in the Caribbean and enjoy the benefits of one of Crystal Cruises’ world famous luxury liners.

For six years, the Milken administration has masterfully hidden the true secret of Tiferet, which actually means “cruise” in Dutch. The word was coined by Joost van Dyk, one of the earliest European settlers in the British Virgin Islands in the seventeenth century and well known friend of Dr. Johan Ablin, Head of School Jason Ablin’s great-great-great-great-great grandfather.

“The benefits of fostering a deep connection with the state of Israel through a four-month fellowship program is a great selling point for prospective students and their families,” Ms. Amy Miller, Associate Director of Admissions, said in a heated press conference hastily scheduled hours after the news leaked. “But let’s be real: Caribbean cruise or Israel? The answer is obvious, and the student body wholeheartedly agrees.”

Indeed, the facts support this assertion. Tiferet’s participation has increased every year since its inception, and approval rates for the program continue to hit all-time highs.

The foundation of the idea for a secret cruise came about when the first Tiferet delegation in 2007 came to a realization that although everyone in Los Angeles believed they were in Israel, in reality they could be wherever they wished and simply Photoshop themselves on Israel backdrops to fool their parents and peers.

The Milken administration, never one to go against the requests of the student body, went along with the idea and allowed the cruises to continue as long as the secret could be kept tight-lipped.

And in possibly the most stunning news of all, very little opposition has been raised against the true Tiferet now that the secret has been revealed. Early poll results from the class of 2015 show that 98% of current freshmen intend on going on Tiferet next year, with the remaining 2% simply drawing hundreds of happy faces on the poll paper.