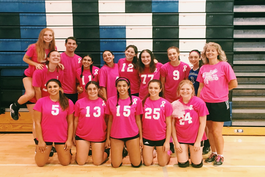 Earlier this month, the varsity girls volleyball team hosted their annual Dig Pink tournament. With all of the proceeds going toward breast cancer, the team sold snacks and shirts to raise money. With hopes of winning first, the team placed 4th out of eight teams. The untraditional two matches to fifteen points served as a disadvantage. Being a team who needed time to wake up, the Wildcats found themselves struggling to get back points lost earlier in the game.

The excitement from the girls could not be contained. Miranda Milner ‘16 remarks that she “loved the support from the teachers! It was fun to see so many people come out to watch us play”. With the bleachers full of supporters, friends, family, and teachers alike, the varsity team split two games, and won one qualifying game. This lead them the team to compete for third, which they lost.

One game in specific, the game against Archer, had the varsity team on edge. For weeks, the Milken team had been waiting in anticipation to play against the Archer School team, because of their star player, a D1 recruit, Christian. When the team faced Archer in the first round of playoffs, they did not go down without a fight despite being beaten.“They had strong players, but we fought hard and I’m proud of our team” Leora Wenger (Captain ‘16). Resulting in a loss the varsity team took the defeat as a chance to learn and prepare for the upcoming league game.

Jessica Cremin ‘16, one of the three team captains, was the recipient of the All Star Award for the Milken team. Teammate Hannah Newman says, “We are so proud of Jessica. She was super consistent throughout the tournament and really deserved the recognition for her hard work and dedication”. With her unbelievable hits, and great sportsmanship, Jessica Cremin proved herself in the Dig Pink tournament and helped varsity win. Cremin says that Dig Pink is her favourite part of the season and she was honored to be picked for the award. Despite not placing first, the varsity team was proud of their play and happy to help raise money for a great cause. 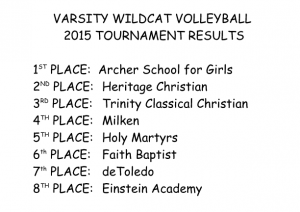 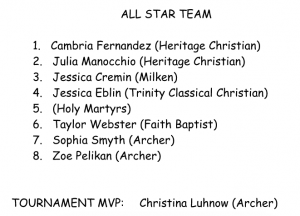