It’s no secret that our perception of the perfect body is impacted by the media. Body image is defined as the “subjective picture or mental image of one’s own body.” The way we view our bodies can be affected by the shows we watch, the magazines we read, and the stores we shop at.

Victoria Secret and Brandy Melville are stores commonly shopped at by female Milken students.  Not only do these stores have a large following, but they also advertise and size their clothes in a way that promotes women to feel insecure about their bodies.

Earlier this year I walked into Victoria Secret at  Third Street Promenade with one of my friends, and saw this ad campaign: 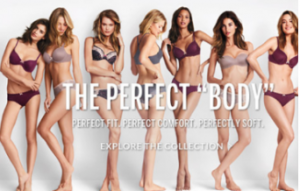 A store selling women’s clothing should try to make women feel beautiful and confident about their bodies. Victoria Secret is trying to sell the perfect “body”, but this perfect “body” is not a realistic (or healthy) goal for most women. All 7 of models have almost identical bodies: defined stomachs, ribs showing, and small thighs. Victoria Secret is defining beautiful as this one body type.

An underwear brand called  Dear Kate used the same slogan “The Perfect Body” in one of their campaigns, but showcased more realistic, common and diverse  bodies – a stark contrast to the models used in the Victoria Secret campaign. These women’s bodies reflect regular women ranging in size and color. This campaign encourages women to feel beautiful about their bodies, whether or not they are a size 0.

I later found out that Victoria Secret’s campaign was a actually a big mistake on the part of the advertisers. They claimed that they didn’t mean that their models had the perfect body, but rather, “perfect body”  is merely the name of the bra. They have since changed the campaign to “a body for every body.” It does not matter if the campaign was really an accident; it was seen and consumed by thousands of shoppers. Another thing is also left unexcused:  all of Victoria Secret’s models are size zero, and praised, even idolized for having this body type.

Another store that is often under fire for issues with body image is Brandy Melville. It mainly advertises through its instagram, which has an overwhelming 2.4 million followers. They post photos of their employees  and their models in their clothing. The majority of the girls featured on their instagram look the same: Caucasian, petite, straight hair, long-legged, and blond (with an occasional brunette). 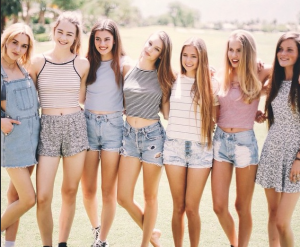 Photo posted by Brandy Melville’s Instagram of seven workers they sent to model at Coachella Weekend 1. 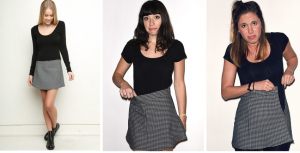 This article proved that one size certainly does not fit all. Instead of making several sizes to fit all bodies, Brandy Melville’s one size policy limits the amount of women able to wear their clothing.

Why do stores that diminish women’s confidence and exclude certain types of women from their brand stay so popular? Why do we, Milken students, continue to stop at places like this? Yes, the clothes are cute, but the world we live in has glamorized the “ideal” “too thin”  body type to  the  point that we do not realize these stores advertise and prosper based on lowering the confidence of women of other body types.  Disturbingly, the glorification of only one body type in the media is so common that it doesn’t surprise anyone anymore.