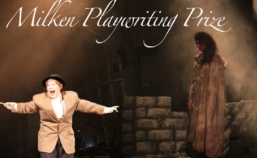 Mr. Robert Menna, performing arts teacher, is holding a play writing contest that will give writers the chance to have their play performed by Milken students in a full production. The winner will also be awarded with a $2,000 prize.

This writing contest has been advertised internationally, and many of the writers have recommendations from top literary agents and theaters. Although the deadline for submitting a script has passed, Milken students can still be involved in choosing the best play. Menna is still looking for volunteers to help analyze and rate each show. The winner will be announced during January of 2015, and the production of the play will take place during November of 2015.

“For this to be a success, it is important for us to work as a community to establish this important prize. We have wonderful community support and I invite you to join us,” Menna said.

Menna created this contest in order to produce a quality play with both a female lead and a large cast, as he knows that this is hard to find. Additionally, Menna understands that there is often a lack of funding for skilled writers, and wishes to give them the opportunity to see their play on stage.