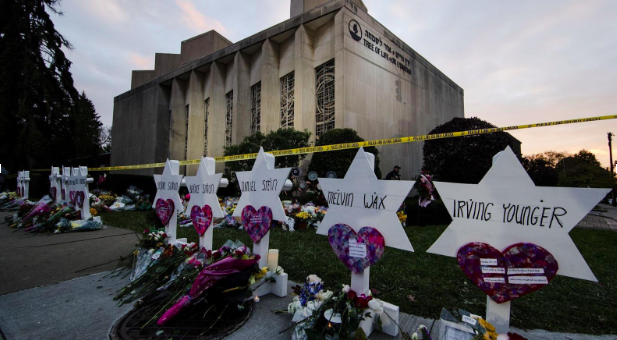 On Saturday, October 27, eleven worshippers were gunned down in the Tree of Life Synagogue in Pittsburg.

Make no mistake.This is a hate crime.

The shooter was active on a site called Gab, which has become a safe haven for neo-Nazis and other extremists, and shouted anti-Semitic slurs as he opened fire against the unsuspecting and helpless members of the synagogue. In the immediate shock of this event, the Jewish community throughout America supported each other and mourned the massive loss, creating unity that can only be brought on by such a devastating event. With this strengthened unity in the American Jewish community, there is also a sense of isolation from the greater American population.

Instead of using this tragedy as a means for detachment and despair, it should be used as a catalyst for change.

Before this attack, America felt like a relatively safe place to be Jewish. Although Jews were not oblivious to the existence of anti-Semitism in America, the instances were predominately nonviolent. The shock of this attack stemmed from the unprecedented and shocking hatred of someone who would actively and senselessly murder multiple people for the sole reason of their Judaism. This hateful act is a rude awakening for the Jewish community, but this has occurred to other minorities in America since its inception.

The public, however, has become desensitized to this loss. The sheer multitude of hate crimes that appear on the news every day began to incite a mere post on social media or a half-hearted comment. The most prevalent instance of this hate is towards African-Americans. Just three days prior to the Tree of Life shooting, two Black men were murdered inside of Kroger grocery store in Kentucky. The shooting is not legally considered a hate crime because Kentucky’s hate crime statute does not include homicides, even though it was clearly racially motivated. This has not received as much attention as it merits, which is unjust.

This injustice is not limited to one community, it is occuring to almost every minority in America. On July 31, 2018, a Sikh man was attacked while putting up political campaign signs near his home just outside of San Jose, California. Two teenagers threw sand in his eyes, knocked him to the ground, spat on him, and vandalized his truck with the message: “Go back to your country.” This is another instance of a hate crime against someone’s religion and nationality that was disregarded by many Americans.

“In 2017, NCAVP recorded reports of 52 hate violence related homicides of LGBTQ people, the highest single incident number ever recorded by NCAVP.” Little to none of these homicides have been publicized in the news. Hate crime in America is a widespread issue and needs to be brought to the attention of the public eye in order to figure out a way to eliminate it. It is important to understand that the Pittsburgh attack may make us feel secluded, and we are not alone in this struggle for justice.

Because hate crimes span across so many minorities, the only way to make progress to eliminate them is to come together and have conversations about these issues. “Despite white men comprising only 31 percent of the population, 97 percent of all Republican elected officials are white and 76 percent are male. Of all Democratic elected officials, 79 percent are white and 65 percent are male.” This domination of our country’s leaders by a specific, privileged group means that minorities must come together to raise awareness about the injustice and inequalities we face on a day to day basis.

Another step that can be taken towards fixing this issue is diversifying the people you interact with. This means realizing that going to Milken has severely limited the group of people you face in your life. This does not mean that you need to leave Milken in order to find a solution to hate crimes, but to step out of your bubble and bring variety to your community. It is hard for someone to grasp the inequalities that other minorities face if you do not personally know anyone struggling through it. This will broaden your empathy and compassion for other minority groups because you will have a personal relationship with someone grappling with it.

It is also important to stay informed about what is going on in the world and to make an effort to learn about what is occurring to marginalized groups throughout the country. There is no way to help if you don’t know what’s going on. In order to see effective change within the government system, it’s of the utmost importance that you vote for officials you believe will make a change. An unfortunate amount of US citizens do not take part in the voting process because they do not believe that their voice matters. This idea is incorrect and you should be aware that your vote matters, along with everyone else’s. A lot of the issues that allow mass shootings to occur are related to the legislation and passing of certain laws. It is crucial that you use your education to vote for the government officials that you believe will leave a positive impact on this country, including the protection of citizens.

As minorities, it is our responsibility to defend our safeties and ensure that a disaster and tragedy like this doesn’t happen again.