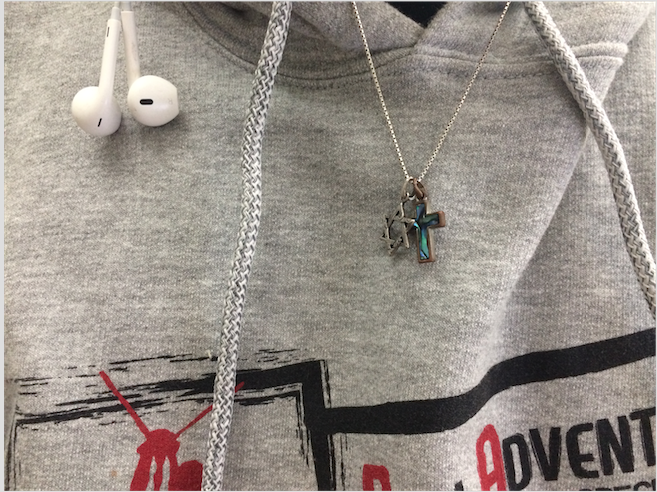 When you walk around Milken, you’re most likely going to see IDF garb, Stars of David, and plenty of Jewish pride. For most Jewish kids, this is the norm. But what is it like when you’re the kid who has the Cross on his chain instead? One thing is for sure about being a half-Christian, half-Jewish kid at a fully Jewish school: it’s definitely a unique experience.

When I first arrived at Milken at the start of my junior year, I found myself in culture shock. I had no idea what I had gotten myself into. I was already accustomed to the usual high school stuff — working hard, playing sports, and joining clubs — but at the same time, I was a “Jew-ish” kid thrown into a very Jewish environment. I had never studied Judaism in my life, but then there I was, learning Hebrew and studying the Torah every day. This chance definitely threw me at first because I wasn’t used to learning the subjects. But despite this speed bump I was happy with the new found ability to learn my Jewish heritage.

There is plenty to love about Milken. Here I’ve learned where I stand politically as a Jew, from the Gaza conflict to Israel’s international relations as a whole. From sitting in Jewish Studies to relaxing at lunch, I always enjoy the times when I get the chance to learn from people who are very prideful and knowledgeable about their Jewish identity. From these experiences I have learned that Milken has every type of Jew there is, from the kids who practice shabbat, keep kosher, and wear kippot, to those who go out to parties on Friday nights, eat bacon and never go to synagogue. Milken is truly a place where I have seen every type of Jew there is and realized that not all Jews are the same.

So, I’ve said what I love about Milken and how it has taught me about who I am as a Jew. But there’s another side of me that is filled with bunnies, Santa, and a Messiah — the side that is based in Christianity. I have a Christian mother and a Jewish father, and my Christian background has shaped who I am as a person. From making decisions by WWJD (what would Jesus do), to learning about the nativity, WWJD takes effect every time I go to make a decision that affects others. The nativity has taught me about trusting my instincts just as the three wise men did to find Jesus. By using this as a guide I have kept myself out of trouble, and hopefully been a more selfless person.

Living in the middle of two religions, I can attribute who I am as a person to both sides. From praying before meals, to going to Jewish Thought class first thing in the morning, to crossing myself when I am thankful for something, I have realized that I integrate both cultures into my daily life. Without Milken, I would have had much less of an understanding of my Jewish identity. Although I may still be “Jew-ish”, at least I know that both sides of who I am are present in my life, not just one. And that is thanks to Milken.