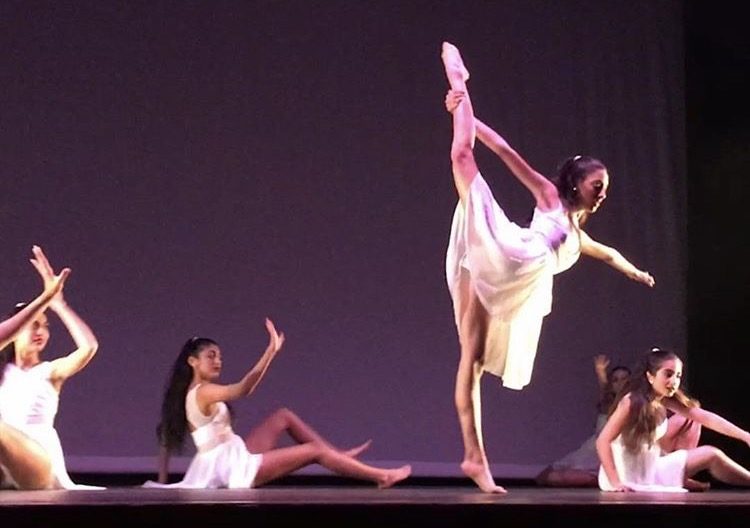 On Wednesday, April 5, 2017, the Milken Dance Team performed a year’s worth of hard work and elegant choreography on stage before a live audience. This was goodbye for the two seniors, Isabel Bina ‘17 and Lila Hanish ‘17, and after attending the performance, The Roar created a list of highlights from the show:

In a performance titled “Mind Games” with choreography by Andrew Rincon, Isabel Bina ‘17 took control of the stage for her last solo as a part of the Milken Dance Team. In a sparkly black one piece, all eyes were on Bina throughout her beautiful twists and turns.

Lila Hanish ‘17 had the second senior solo of the night in a performance titled “Near Light,” choreographed by Andrew Rincon and Lila Hanish. Her embroidered silver dress shimmered in the spotlight as she touched the audience with her sophisticated choreography.

After watching the girls’ senior spotlight videos (in between each of the dances), the show’s theme of self-love was evident. The junior officers of the dance team, in addition to Lila and Isabel, spoke about what self-love means to them, a pivotal topic to touch on. Responses included “be who you want to be” and “accepting yourself for your flaws.” Across the board, the varsity dancers exhibited how crucial it is to love yourself.

In addition to the beautiful senior and junior solos, there were incredible group performances. Some of the eye catching group dances included “Sway” performed by Isabel Bina ‘17, Sofie Bina ‘18, Lila Hanish ‘17, Talia Shakib ‘18, and Kayla Yedidsion ‘18. The upbeat performance, “Fembots,” performed by the whole dance team, grabbed the attention of the audience and elicited enthusiastic applause by the end.

The finale was flawless. The white flowy dress, chic mirrors, and vivid emotions moved the whole audience. These angels concluded the theme of self-love in a piece titled “I Am.” Thanks to the creative mind of Andrew Rincon and Neaz Kohani, and Brian Byrne for making ideas become reality, the show couldn’t have been better! Congratulations to the 2016-2017 dance team on an amazing year!