According to FiveThirtyEight, 46.3% of Americans support impeaching Trump, which is uncannily similar to the 46% of Milken students who feel the same way. A survey went out to the Milken student body on October 10th, garnering about 150 responses. The nationwide approval rating for Trump is 43% among likely or registered voters, which is only slightly lower than the 47% of Milken students who responded to the survey. The scores represent the vast diversity in thought among the Milken community, which is just as divided as nationwide politics. With a student body that holds such split perspectives, managing political conversation and debate in school becomes a difficult task.

Many students feel uncomfortable expressing their political beliefs about controversial topics like Trump, abortion, and the Me Too movement and may be unsure of where to do so. Joseph Rabinek 20’ spoke with The Roar about the club he leads, the Junior State of America. As a nonpartisan political club, they invite students to “explore both sides of a political topic through discussion in a respectful manner.” He explained how JSA both allows students to exercise proper debate etiquette and learn about the issues at hand. He is aware that when discussing political topics, “it is quite inevitable that a dispute will arise,” but the use of active listening can allow both sides of the discussion to be heard and understand one another. Through clubs like JSA, Milken fosters civil discourse within the student body.

However, for conservative students on campus, there seems to be a belief that Milken has been one-sided in presenting sensitive topical issues like the Kavanaugh hearings, abortion, and climate change. Joey Sarvian 20’, leader of the YAF (Young Americans For Foundation) club, notes that in the past, “Milken brought in speakers who claimed to be objective but were in fact very far to the left.” However, he acknowledges the improvement and steps towards pursuing diversity of thought that the school has taken, such as allowing YAF to bring in Dennis Prager, a conservative Jewish commentator, to speak on campus this past September. Sarvian elaborated on Milken’s openness to student feedback and commitment to “allowing all student’s perspectives to be heard.”

With a student body comprised of varying voices and strong opinions, having spaces like JSA and YAF is essential for students to express their perspectives freely and learn from their peers. These student-led groups provide an outlet for the Milken community to discuss political topics respectfully. When a community is split among viewpoints, there exists a need for constructive dialogue. These clubs have taken on the responsibility of making Milken students think harder about and feel more comfortable expressing their political views. 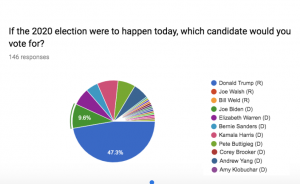