A Nazi officer came knocking their door. Little did they know that the same officer would live with the landlady and Eva’s family for a terrifying period of time taking their bedroom while they slept in the attic. Their light features and faux-broken German allowed them to allay the officer’s suspicion, skillfully concealing her Jewish identity and German origins. After 2 weeks of hiding in plain sight, worried that Perlman’s father would come home and unknowingly blow their cover, Perlman’s family miraculously emerged from the situation unscathed.

On Tuesday, April 23 Milken seniors were supposed to be on the March of the Living commemorating the 75th anniversary of the Holocaust. Instead, they logged onto a zoom call on Yom Hashoah to hear from Eva Perlman, a Holocaust survivor who was supposed to meet these same seniors in Poland and Israel. Despite the traumas she would be recounting, she appeared with a bright smile and hot pink lipstick.

In lieu of Milken’s usual Holocaust Rememberance Day class meetings where the community gathers round in the gym with slideshow presentations and Col Echad performances, Milken faculty, students, and family members logged on to a Zoom call led by Rabbi B.K to say prayers and hear what it was like to persevere through such a horrific point in history.  Due to the shrinking availability of Holocaust survivors, the opportunity to hear from a survivor has become increasingly rare and valuable.

Born in Berlin in 1932, Perlman was just a child at the start of World War II and throughout the Holocaust. She quoted Deepak Chopra, saying “there are no coincidences, only miracles.” Perlman described her story in terms of such miracles. The first of which was her father deciding to move with a college in Paris after losing work. Her father had the foresight to know that the situation in Germany was dire and that the outskirts of Paris would be safer for his family. Amazingly, Perlman’s grandparents were able to leave Germany with their belongings and valuables, some of which remain in the family. These belongings were given to Perlman’s mother and at customs, she was berated for her accent and insisted that she open her trunk of valuables. However, Perlman’s mother did not know the significance of what was in those trunks and the damage that would be caused if they were unveiled. Therefore, she unknowingly made a large enough scene to convince the customs man to let her go, thus saving all of her belongings. 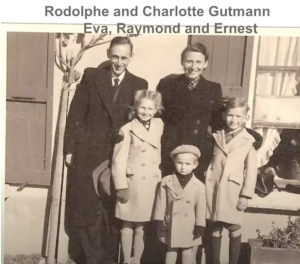 At the onset of the war, an eight-year-old Perlman found herself caught up in a number of different living situations and experiencing a number of anxiety-provoking close-calls. Eva credits her survival to the tenacity of her family and the kindness of many “righteous gentiles” among those who betrayed Jews, reporting them to Nazis. Notably, Eva found refuge in a Chrisitan home for children early on where she was well taken care of and even attended church services despite never being pressured to convert. Later on, her siblings and mother would stay at a residence with their “landlady” who would protect their identity and even bury their valuables for them when they couldn’t.

When reflecting on such miracles Eva shared a fleeting emotional moment where she exclaimed with a faintly hoarse voice, “these were all godsends” but then immediately waved her hand as if to switch off her tears and muttered a “whatever” before resuming the rest of her story. This speaks to the way that Holocaust survivors like Eva and others who survive traumatic events get through life- refusing to dwell on the hardships and persisting on with the next phase of their lives.

Upon moving to America, her traumas did not simply vanish. Over the years, she obtained an inferiority complex both for being Jewish and being German. As a Jew, she had learned to hide her identity from a young age and watched people be targeted and considered subhuman for such an identity. Moreover, she hated that she was German, particularly when living in America since the U.S had just defeated the “evil” Nazis. She noted that participating in March of the Living and meeting kind, supportive gentiles in Berlin was what allowed her to overcome these feelings.

After living through the Holocaust, many face phenomena called survivor’s guilt, in which they feel guilty for having survived when others have not. Rather than wallowing in such feelings, Perlman made a decision to be grateful for all the miracles that led to her survival and that of her family. It is this attitude that led her to publish her novel, “Eva’s Uncommon Life Guided by Miracles”. She advised us to “be loving, be caring, be grateful for everything that happens to you. That is the key to being happy.” Many Holocaust survivors have lost their faith in God entirely after perceiving God as a bystander to the cruelties they have suffered. Perlman thinks differently. She said that: “if anything, God must have wept when he saw what his creatures did during the Holocaust.”

Perlman was asked about what her life story could teach us about the current pandemic we are living through. Again, she reiterated the concept of being grateful. She herself was grateful for being able to have the living conditions she had in Paris while others in places like Amsterdam faced many more hardships. Like she did, we should acknowledge our privilege and that others may be facing a much more difficult reality. Although certain aspects of the current situation remind her of the Holocaust, she emphasized that “the conditions now are nothing compared to what they were.” Compared with her experience, the coronavirus is “nothing” and we just need to be patient and choose to be happy.

To Perlman, the most important takeaway from the Holocaust is to remember it and to tell the story, just as she did for us. The only way to ensure another Holocaust does not happen again is to “fight against ignorance and to transmit what we know and what we see of the next generation.”