In the spirit of Hanukkah, the annual pre-winter break color games manifested a more Jewish identity. For those who noticed people cheering at lunch throughout the week before break and kept hearing the phrase “color games” and had no clue what it was, it is a series of activities that occur during lunch for one week- twice a year, where members of each Milken class compete in the festivities and score points for their class. It is an opportunity for Milken students to represent their class, while having a blast!

This year’s games were even more upbeat and successful than last year, but with a little bit of a festive Hanukkah feel. The games began on Tuesday in the amphitheater with a dodgeball activity. The Hanukkah twist was that the game was the Greeks vs. the Maccabees, with the underclassmen as the Maccabees and the underclassmen as the Greeks. While the upperclassmen had more players, to represent the Greeks outnumbering the Maccabees, the underclassmen had the opportunity to spin a gimmel on a dreidel to get back in the game, representing the miracle of Hanukkah.Even though the underclassmen had a chance to reenter the game, the upperclassmen won this challenge. Director of Experiential Learning, Mrs. Lauren Miller explained , “The connection between the Color Games and Hanukkah is representative of greater collaboration between J-Life and Student Government this year.” The J-Life Mazkirim have been collaborating with their fellow Student Government Executive Council members to create better communication and connection between the two leadership groups, and Miller adds, “It’s great to know that the effects of this have been noticed by the student body.”

When students were asked about what they think of the integration of Hanukkah into the color games, Hannah Shayefar ‘19 said, “I think it’s fun that the color games have a Hanukkah twist because it is currently Hanukkah and it makes the games more interesting. Elijah Dardashty ‘20 also noted, “it helps me better connect with my Jewish identity and feel more in the spirit of Hanukkah.”

The activity on Wednesday was completely Hanukkah related: a Latke presentation contest. Two teams per class each got two premade latkes and had five minutes to use apple sauce, sour cream, and chives to creatively design something delicious out of it. Jonny Nourafshan ‘20, Sophomore Class President  participated in this competition with his friends, Oliver Maddahi ‘20, Joe Mehdizadeh ‘20, and Josh Lalazari ‘20 and although they did not win, Nourafshan exclaimed, “I enjoyed representing my class and bonding with my closest friends in front of the whole school.” The judges scored based on creativity, taste, and presentation and at the end the seniors came out victorious.

On Thursday, in the amphitheater, a doughnut Hanukkah challenge took place. One students per grade used their mouths to pick up four doughnuts and place it on four candles on a Hannukiah. Gabe Cohen ‘20, the participant for the sophomore class, did not win the challenge, as the juniors did, but as he noted, “It was lots of fun to participate with everyone and have fun this week, especially in the last few days before winter break, so we could end it off strong.” 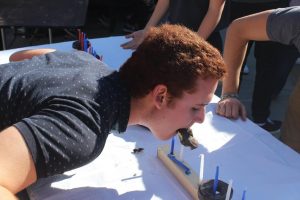 The final activity for the color games was a Hanukkah relay race and it took place on Friday at the Town Meeting. It was a three part relay race where someone on J-Life spun a dreidel, and then two members per grade picked up a potato and put it between their legs. Then, they raced to place it in the basket and used two candles as chopsticks to grab a piece of gelt and place it into another basket. The last person picks up the candles and puts it in a Hanukkiah. Tyler Yedidsion ‘20 representing the sophomore class took the lead in the beginning of the event, starting it off strong for the sophomore class. Jonny Nourafshan ‘20 finished it off well for the sophomore class and placed the last candles on the Hanukkiah.

The winners of the entire color games based on spirit and attendance was, as it is every year, the senior class.