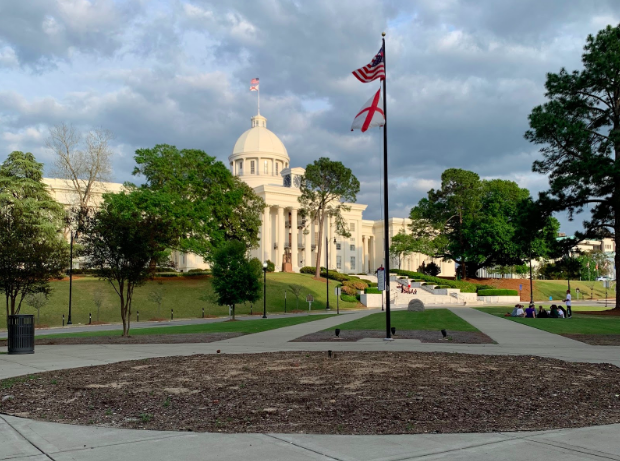 After boarding red eye flights late Saturday night, April 6, the junior class arrived in Atlanta, Georgia early Sunday morning ready to embark on a civil rights journey through the South. Our first stop was at the Ebenezer Baptist church. The church is famous for being the home of Martin Luther King Jr. who was never an official preacher at Ebenezer, but his father and grandfather were, making it a vital part of his legacy. The Sunday service, which we went to was a religious culture shock, extremely different than any Minyan Beyachad I had ever attended. The congregation was very involved with the service, singing along to all the songs and responding with various “Amens” and “Hallelujahs” during the sermon. The most shocking aspect to me was the use of technology and big screens. When I think of a religious service, the first image that comes into my mind is a synagogue where everyone is reading words in Hebrew (that they probably don’t understand) out of a book. However, here, there were four jumbo screens (like the kind at Dodger stadium) filming the service and projecting the prayers. Though this may seem like a small detail, it contrasted many parts of Judaism with Christianity for me. Additionally, many of us had never witnessed a worship session in any religion this vibrant and lively, full of music and engagement. Going to church at the beginning of our trip emphasized the importance of churches throughout the civil rights movement. They were, and still are, a source of strength and hope for the black community. Later, in the afternoon, we drove to Montgomery, Alabama, the state’s capital. The city seemed desolate when we arrived. All of the buildings had marble staircases and huge green lawns in front. The quietness of the city was eerie, but peaceful at the same time – a feeling that is nearly impossible to get in Los Angeles.

Monday was packed with visits to museums, memorials, and inspiring speakers in Montgomery. The day began with a guided tour of the Rosa Parks museum where we took a deeper dive into the evolution of the civil rights movement, which selected Rosa Park’s defiance of a corrupt system to be the forefront of the movement. Next, we visited the Equal Justice Initiative (EJI) Museum. EJI, founded by Brian Stevenson, presented the idea that slavery never ended; it just morphed into different issues. Students walking through the museum were overwhelmed with media including personal narratives of enslaved African Americans, lynching statistics, and the way that racially motivated oppression continues to linger in society today in the form of mass incarceration and unfair treatment of African Americans throughout the judicial system. The most memorable part of the museum was listening to prisoners tell their story of unjust trials and incarceration.

Our class visited the haunting lynching memorial in Alabama next, stirring up many emotions and shock at the physical representation of so many lives taken.

The later portion of the day was dedicated to hearing Joanne, a participant in the Selma march, recount her experience of Bloody Sunday and her perspective on the Black Lives Matter movement and the state of America today with regards to racism. After our meeting with Joanne, the 11th grade class retraced the steps that brave freedom fighters had taken just half a century ago when marching across the bridge in Selma.

On our final full day in the South,, our group had the amazing opportunity of listening to Bishop Calvin Woods speak about his part in the civil rights movement, as a friend and fellow justice seeker of Martin Luther King Jr. We joined him in singing and learning hymns that were sung by freedom fighters in the civil rights era, which helped create a more visceral feeling of what it was like to be a part of this movement. The hymns had to do with using love and not violence, fighting until 100 percent of freedom is granted, and finding strength in God. The spirit of the Bishop amazed us. He is 85 years old, but had the most energy out of anybody in the room. Afterwards, we made our way back to Atlanta, Georgia for a tour of Emory University, where many students fell in love with the campus, scenery, and academic life on campus. We concluded our day by listening to a speaker from Overcoming Racism whose aim is to educate and bring light to the tremendous amount of work left to do in this country to break the cycle of oppression. With a powerful multimedia presentation, Matthew Kincaid stunned our class with appalling statistics and evidence of overwhelming racism still ravaging modern day America. I know that we are all inspired to enact change and seek out ways in which we can steer America on a path of tolerance, equality, and compassion, no matter how much work it takes.

To conclude our journey through the South, we went to the civil rights museum in Atlanta Wednesday morning prior to departing. The museum reiterated how the civil rights movement has changed and shaped America and other parts of the world. The most distinctive aspect of the museum was a simulation of a lunch counter sit-in. I waited in line 30 minutes for a chance to sit at the fake lunch counter and put on headphones that would produce audio of people screaming at me. Even though my peers who went before me walked away shook, I did not think the simulation would affect me. When it was finally my turn, I sat down, put on headphones and placed my hands on the counter and was told not to move them. When the simulation began, frustration started to build up inside me. As it went on, I wanted to bury my face in our hands. I bit my lip hard to keep my face from wincing. The racist comments being yelled through the headphones and the sounds of violence disgusted me to the point that all I wanted to do was get up and leave. But I did not, and two minutes later the simulation was over and I walked away from the scene uninjured and ready to carry on with my day. As I reflect on the experience, I cannot imagine how hard it was for people to endure the hatred and attacks they suffered during the sit-ins. The simulation only lasted minutes for me, but people were beaten, sent to jail, and sacrificed their time during the sit-ins in order to further the civil rights movement.

After the museum, we headed to the airport to board our flights home. Though our experience in the South ended, the issues we learned about are not. Now that we have the knowledge regarding theses issues, we cannot sit idly by, but we must take what we have learned and put it into action.